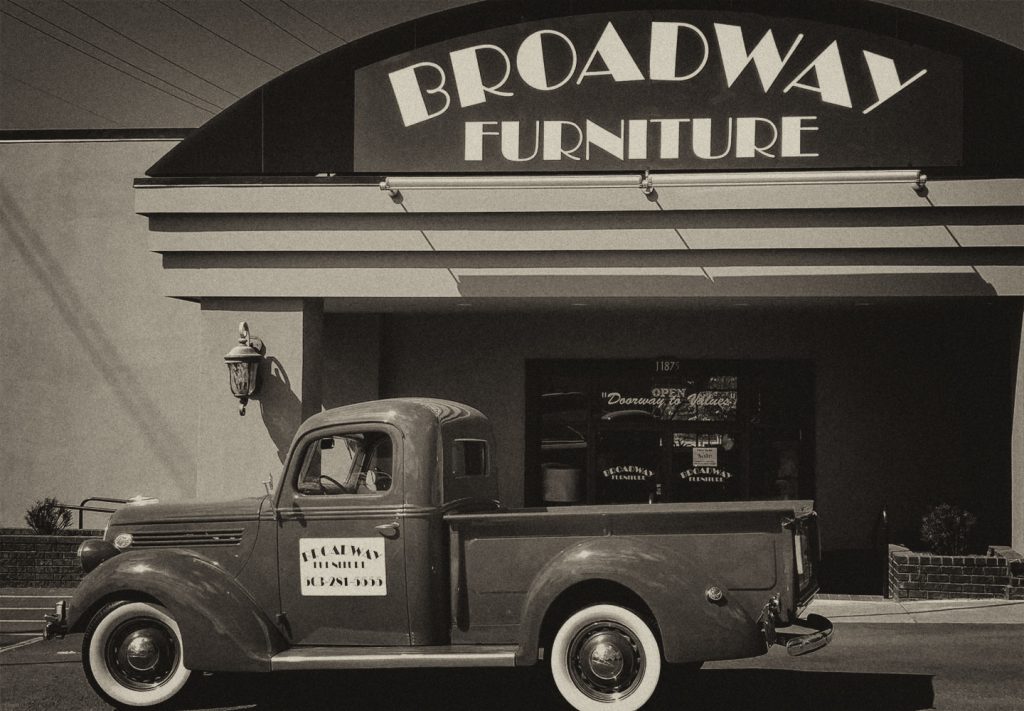 It wasn’t easy to make a buck, feed a family or start a business in 1935. Oregon, along with the rest of the nation, was mired in the Great Depression.

It was hard times everywhere in Portland, but an enterprising young man named Harry Shleifer had an idea. He wanted to open a store where working people could find quality furniture at affordable prices.

Harry gathered $100 and started buying furniture from local hotels. He sold the used furniture in his first store in downtown Portland.

Later Harry and his father opened a store on the east side of town. It got so busy that Harry’s uncles and aunts helped out in the fledgling family business.

When the Great Depression finally lifted, World War II was ramping up. Harry left his business in family hands while he served in the U.S. Navy.

Broadway Furniture was born in the midst of hard times. Harry’s idea to provide outstanding values and great service to customers has kept the store open through economic good times and bad times.

Furnishings for a New Generation

Today Ken Shleifer, Harry’s son, owns and operates Broadway Furniture. Ken says he was “practically born in the store.” He grew up in the furniture business and started working as soon as he could.

Like his dad, Ken believes success comes from treating customers right. He learned at a young age that building relationships with customers was the key to a shopper’s satisfaction.

Ken moved the store from downtown Portland in 2014. He noticed that many of Broadway Furniture’s customers had moved to neighborhoods just outside the city.

Ken wanted to make sure the store was easily accessible to customers. Broadway Furniture has settled into a convenient location in Tigard.

The store address has changed, but the practice of treating customers like family remains the same. Past customers return to Broadway Furniture because they know they’ll get a great deal.

New customers are discovering the benefits of shopping in a local store: expert salespeople, personal attention and same-day delivery for items in stock.

All customers are greeted by friendly people who help them find the right furnishings for any room in their home. All customers find a showroom filled with beautiful furniture at great prices.

When you shop at Broadway Furniture, the money you spend stays in the neighborhood, helping grow your local economy.

More than eight decades after Harry Shleifer came up with his good idea, Broadway Furniture is still a hometown favorite. Customers know they’re in good hands from the time they enter the store until Broadway’s team delivers their furniture.

As Harry used to say, “Customer satisfaction is our success.” Ken agrees, and that’s why he’s kept the tradition of value and service going through the generations.

Visit our furniture store today to browse our wide selection of discounted pieces! We’re here to help you find the very best home furnishings for your life.

Shop Now
Visit Us Today
Basics
Categories
Broadwayfurniture.net
Follow Us
Copyright All Rights Reserved © 2016
0
We use cookies on our website to give you the most relevant experience by remembering your preferences and repeat visits. By clicking “Accept”, you consent to the use of ALL the cookies.
Cookie settingsACCEPT
Manage consent